Having been a spectacle wearer for a number of years now, I became a bit bored of the fashionable styles from the usual high street retailers that offered little inspiration.
Back in 2010 when myself and (the now) Mrs. P. eloped to marry in New York I decided it might be a good time to explore what such a cultural melting pot had to offer in the goggle department.
I had been aware of MOSCOT for a long time, they have been in New York since 1936 and have some very iconic styles worn by some very iconic people. Being that I wanted a classic frame that would fit in more with my aesthetics we headed over to the store on Orchard Street, Lower East Side to see what they had to offer and ended up leaving with more than I had bargained for. 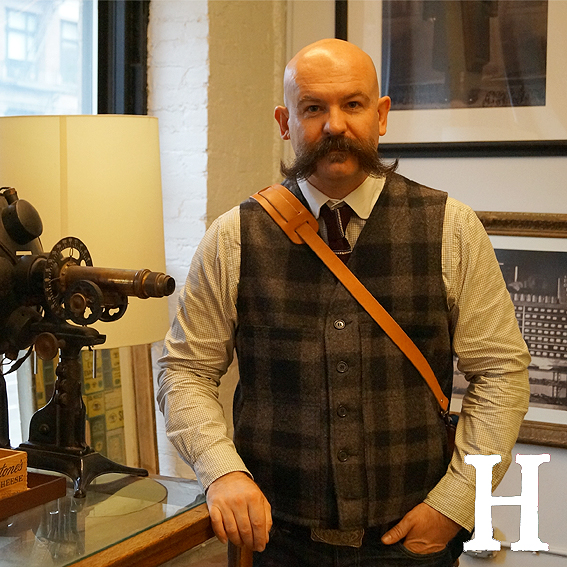 Inside the Moscot shop back in 2010

I was armed with my prescription and met with a smile from a guy called Jay who, like me at that time, had a massive handlebar moustache. My initial aim was to go for the famous Lemtosh frame, however after a trying a few styles I settled with the Tummel frames. The dilemma was black or the beautiful tortoiseshell, the price was so good that I decided it would be wise to get both frames. I got the black ones glazed there too, Jays thoroughness was really comforting – even getting a substantial discount after I gave him a Trumper moustache comb!

The build quality of the frames is superb, seven hinge arms and a really sturdy feel.
Upon my return I eventually got the tortoiseshell ones glazed with transition lenses and have to say they are the most comfortable specs I’ve ever worn and love their vintage style. I hope they last long enough that I can change the lenses in many years to come, so we’ll see. They are a fond memory that I have of one of the best times in my life too.

I was really pleased to have visited the old shop that had been there 70 odd years as it moved across the street in 2013.
I even get an email every so often from them asking me to pop in for a check up. Maybe one day I will have the opportunity…